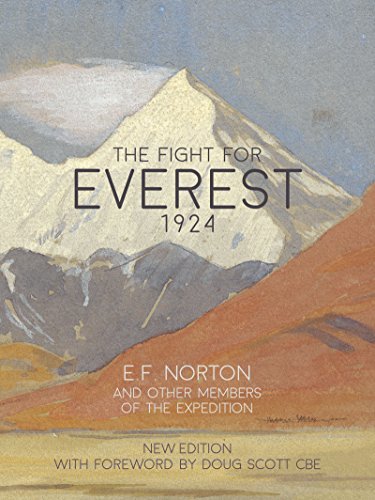 In 1924 Mount Everest remained unclimbed. Two British expeditions had already tackled what was known to be the highest mountain on Earth. The first, in 1921, found a route to the base. The second, in 1922, attempted the summit, reaching a record height of 27,320 feet before retreating. Two years later, a team that included Colonel E.F. Norton, George Mallory and Andrew Irvine returned to the Himalaya. Armed with greater knowledge and experience, confidence was high. But they were still climbing into the unknown. How high could they climb without supplementary oxygen? Would the cumbersome oxygen equipment help them climb higher? Could they succeed where others had failed, and make the first ascent of the highest mountain on earth? Before they could find out, tragedy struck - George Mallory and Andrew Irvine, climbing high on the mountain, vanished into the clouds. First published in 1925, and reissued now for only the second time, The Fight for Everest 1924 is the official record of this third expedition to Everest. The compelling narrative by Norton and other expedition members, and Mallory's vivid letters home, present a gripping picture of life in the Himalaya. Notes and observations from the entire team show how far knowledge of the mountain and of high-altitude climbing had advanced by 1924, and make recommendations for future Everest attempts. As well as the full original text and illustrations, this edition reproduces some of Norton's superb pencil sketches and watercolours along with previously unpublished materials from his private archive. These include original planning documents from the expedition, Mallory's last note to Norton, and a moving letter to Norton from Mallory's widow. Together, they add up to complete one of the most fascinating mountaineering books ever written.